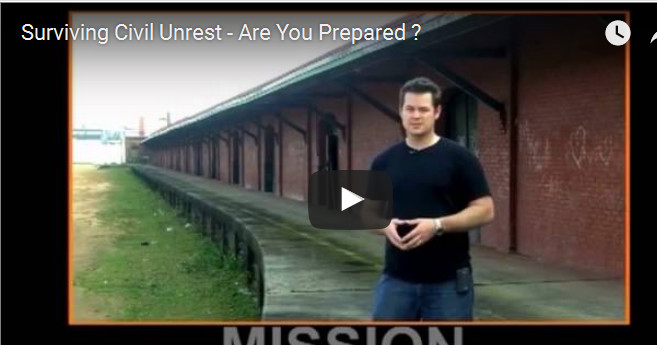 If you think that civil unrest is something that doesn’t happen very often, then you haven’t been paying attention. Civil unrest has become common place. It’s what happens when people get mad and decide that they’re going to protest or riot or hold demonstrations.

During times of civil unrest, chaos always follows, regardless of how peaceful a protest first started. Anarchy raises its head and the norms of society break down and it becomes every man for himself.

The real intent of the protest

The original intent of the protest is buried beneath the herd mentality that takes over when large groups of people become angry. Authority is overthrown and the swell of those tearing down society norms is often too much for local authorities to deal with.

You can’t control how people are going to behave. But you don’t have to be in a position where their behavior negatively affects your day to day living. When there is civil unrest, be prepared to bug out (or make it home safely) in a hurry.

Have a predetermined escape plan. Get away from the chaos. In the middle of chaos, people get injured or killed, so put some distance between you and the situation fast if you can do that.

Make sure you take ways through town or your city that can’t be blocked by swarms of people. When people swarm, injuries happen. Don’t let yourself become vulnerable. In civil unrest, people will often burn buildings.

Don’t get stuck in a building that can be targeted. If you are in a relatively safe place and can’t leave, make sure you fortify the place where you’re at. Those who are causing unrest are looking for targets.

They want to loot and attack. The first step is to thwart impending attacks by making your place a deterrent. Don’t have any easy access points. Have a supply of food and other necessities on hand before the fallout from civil unrest hits your area.

You need to make sure you have a survival bag for each member of your family. Have all needed medications, baby supplies and important papers ready in your car or available if you need to leave in a hurry.

When there is chaos, stores are looted and supplies are taken. The top three supplies that are stolen during civil unrest are alcohol, drugs and cigarettes. These items always get taken first.

Following that, baby supplies are stolen, then food. When the food runs out, that’s when the people involved in civil unrest begin to prey on other humans. You’ll want to make sure that you have a way to defend yourself. When there is civil unrest, the police often can’t get to certain areas to help victims, so make sure you take steps to prevent becoming one.